You read that title right. It happened. It’s happening. Let’s get into it.

That means six tournaments to wrap up the Olympic Qualification period.

First – a quick update on Doha, the event that’s happening in the Middle East at the time this article was published. Our AVP teams are looking solid. On the Women’s side, the A-Team, Stockman/Kolinske, and Canadians Pavan/Humana-Paredes all won their pools. Sponcil/Claes battled through the Qualifier and are looking great in the Main Draw. They got second in pool play, only losing to friends Sarah and Mel in a close third set (14-16). Unfortunately, Patterson/Budinger and Schalk/Brunner on our Men’s side did not make it through the Qualifier. But the Main Draw men are holding it down. Gibb/Crabb won their pool handily, winning both matches in two sets. Dalhausser/Lucena were upset by an excellent French team in the first round of pool play, but won their second to make it out of pool. They then won their first elimination match to stay in the tournament. Note: these are the results as of writing this, but check the FIVB’s website for more info.

A month after Doha, international athletes will head to the highly-esteemed vacation destination of Cancun, Mexico for a grueling series of three Qualification tournaments. The three back-to-back Bubble events in Cancun – appropriately deemed The Cancun Hub – are sure to be the highlight of the World Tour. AVP fans can be comforted knowing these three important tournaments are in the Eastern Time Zone. No more waking up at 4 am to watch a Livestream, like I may or may not be doing as I write this. 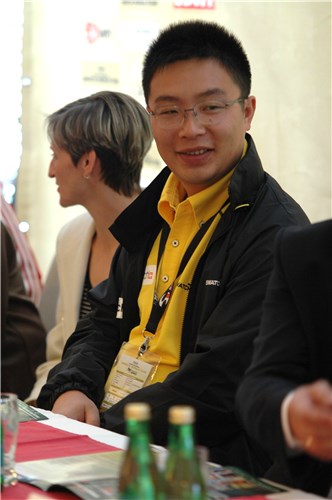 Sports fans are used to Bubbles by now, an ingenious solution to safely isolate athletes and organizers while minimizing travel. These three back-to-back events will be modeled after Doha’s Bubble procedures. I recently chatted with FIVB Beach Volleyball Events Director Yu Cao, and he filled me in on all the COVID-19 protocols:

“All the participants need to be tested before traveling, tested upon arrival, and they need to be tested during the competition regularly. Once they arrive at the airport, they will be testing in the airport and they will be isolating in their hotel rooms waiting for their test result (normally 24 hours). When they get a negative result, they’ll be free to move inside the Bubble – which is the hotel, the training site, and also the competition site. You cannot go outside this Bubble. For transportation in between them, we have dedicated vehicles.

“It will not be completely like what the NBA has done,” Yu continues, “but it will be more enhanced compared with the AVP event you did last year. I had a talk with [AVP Chief Operating Officer] Al Lau; we will borrow the experience and lessons from [the AVP Champions Cup Series].” Cancun will differ from the AVP Champions Cup Series in that the teams will not be solidified for all three events. “The Cancun Hub is within the Tokyo Qualification period,” Yu says, “and accordingly, we shall keep the sports regulations as consistent as possible within the qualification period.” So it will be a Bubble environment, but athletes are not confined to all three events nor barred from the other two if they miss the first one. Seeding will change between the three events, updating after each tournament. It’s possible that teams will remain the same throughout the three tournaments, but it’s worth noting that it’s not a requirement as long as all protocols and regulations are followed. Those protocols will be the same as the Doha requirements.

In terms of Country Quotas (CQ), the FIVB has said that they have the ability to run the CQs on-site for each individual tournament. But they have given the National Federations the option to run their own CQ on home soil or have the FIVB run it in Cancun. We’ll see what USA Volleyball decides to do in the coming weeks. I’ll keep you posted in future articles.

The Cancun Hub is great for teams from stricter countries like Australia. The three-tournament series in Cancun will make their travel worth it compared to one-off events like Doha. Australian teams signed up and then withdrew from Doha, likely because the restrictions on returning home after the tournament would be too rigorous or impossible.

Yu says, “We did our best to help [Australia] with an official letter. Any efforts we can make with National Federations, with local government, or with national committees – we’re doing our best to facilitate. We always respect the IOC qualification principle, which is highlighted by two points: fair access and equal opportunity.”

Hopefully, by the time the Russia and Czech tournaments roll around, the world will be safer, and all countries’ travel restrictions will be fewer. But, of course, we can’t predict anything. We all know how annoying to plan things in a pandemic.

After the Qualification period ends on June 13, 2021 (effectively after the Czech tournament), there will be one more chance for countries to earn a quota spot through the five Continental Cup Finals. But that will likely not affect AVP teams; USA Men and Women are both likely to earn two quota spots via the Olympic Ranking pathway. Beyond the Qualification Period, there will still be at least two more World Tour events in 2021. The first will be in Gstaad, Switzerland, from July 6-11. Often in Olympic years, the Gstaad tournament is the last before the Games. After a break from the Olympics, the FIVB World Tour Finals will take place in Rome, Italy, from September 8-12.

The FIVB is also working closely with Brazilian organizers to get another non-Olympic Qualification tournament on the schedule in Itapema in June or July. Yu tells me, “the FIVB would love to secure more events in 2021, and will add more events once confirmed to the calendar.” Which means potentially more international volleyball in 2021. Yay!